Waking up, we packed our bags, left them outside and headed down into the dining room for our last meal upon Plancius. Early in the morning we were already docked into Ushuaia, and the sights of land was comforting after two days of sea-sickness, but it was also a bittersweet feeling.

At the pier, several other cruise ships were there, along with another ship of Oceanwide Expeditions, the Ortelius. Amongst our new group of friends, the couple from USA were actually booked into the Ortelius for today, taking an 18-day journey through to the South Georgian Islands and up to Montevideo, Uruguay. And when they booked, the ship was at 55% capacity! All of us missed the penguins already, and we were all tempted to see if we can catch a last minute deal to hop aboard. Unfortunately, no last minute deals existed, and the itinerary wasn’t very tempting with about 8+ days at sea…. Which in hindsight, was good because we did some pretty awesome stuff in the next 18-days, too.

We met up with the group for lunch, and with about 15 people we headed to a rather popular cafe spot on the main Ushuaia strip. When our waiter asked us (individually!) where we are from, it was pretty funny to actually hear everyone say where they’re from in a different accent of English, with different ethnic backgrounds in different locales all over the world! And on the streets, we even saw some of the crew aboard the ship!

The rest of the day was spent lazing around and catching up with the internet. For dinner, we had some fresh king-crab. We hand-picked a big guy weighing in at about 2kg, and it fed a group of 4!!! Delicious.

One day of rest, tomorrow we’re back on a 5am bus out of here! Good bye Ushuaia! 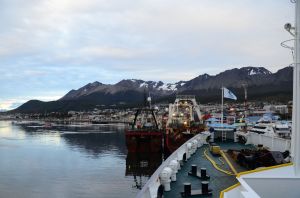 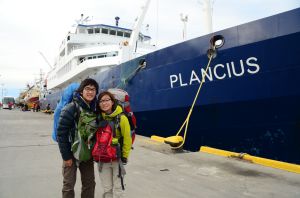 So sad to say goodbye 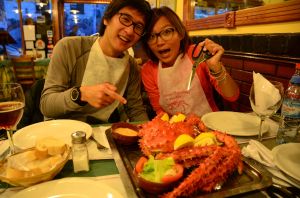